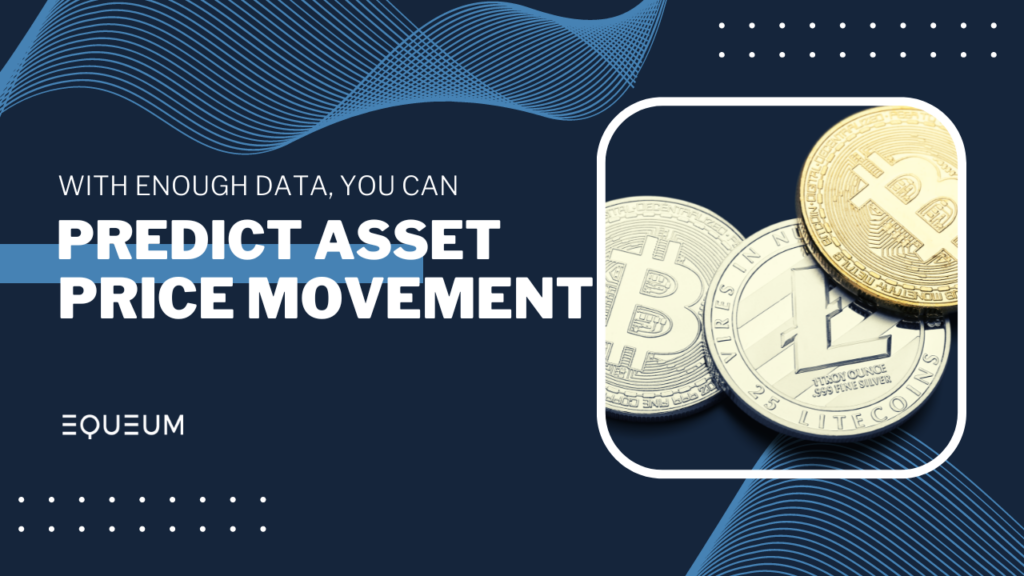 With Enough Data, You Can Predict Asset Price Movement

“If we have enough data, I know we can make predictions.”

With “enough data” asset prices, as with the weather, can be predicted with a high degree of accuracy.  Jim Simons set out to prove the point by founding RenTech… the most profitable investment fund in the history of Wall Street.

Using “enough data” Equeum is also proving that it is possible to create highly accurate asset price forecasts on a much larger scale.  Read on to learn more.

What would enable meteorologists to create forecasts with even greater accuracy would be a platform where meteorologists could work in concert, share resources, and access a data set vastly larger than feasible at any single firm.  In essence, a creator economy.

Weather forecasting and asset price trend forecasting have many things in common. By far, the most important of these: is access to “enough data.”

Jim Simons founded Renaissance Technologies (RenTech), wanting to prove that with “enough data” it was possible to accurately predict asset prices. The proof was RenTech, the most profitable investment fund in history, what Bloomberg calls a “moneymaking machine like no other”.

Imagine the possibilities of doing on a large scale what the Renaissance has done on a small scale. A platform that would attract the world’s self-selected best developers, enabling them to build upon each other’s work and leverage economies of scale to provide them with a rich set of shared resources, the most important being a massively-scaled set of data. This large-scale creator economy would create forecasts vastly superior to those produced by any single firm.

In this article, we will describe the important components needed for such a creator economy to thrive, and how we at Equeum have gone about putting those components together, with the result being highly accurate forecasts fueled by the most critical component: data.

-Anonymous, as quoted by Equeum advisor Rishi Narang, author of “Inside the Black Box”

Imagine a scenario where, to create a forecast, every meteorologist would need to travel and install a global set of weather data sensors. Or, to produce a Tik-Tok video, creators would each need to build a video camera. The massive inefficiencies in either scenario would preclude the formation of a creator economy. With such massive inefficiencies, a creator economy is simply infeasible.

Today, the existence of thousands of asset management firms is the cause of inefficiency of similar magnitude. These firms compete based on price prediction accuracy, and inevitably they end up amassing a largely duplicative data set. This duplication of effort also extends to staffing and prediction resources and is the largest line item in the $1T in fees these firms collectively charge.

The economies of scale of a creator economy virtually eliminate such inefficiencies.  Reducing the $1T spent currently by just 5% would free up $50B, a portion of which could be used to incentivize the collection of a broad, deep, and granular set of data.

We can look to recent market events to prove the real-world impact of such a massive data set. On June 10th of this year (2022), the US Bureau of Labor Statistics reported that over the previous month, inflation had risen at the fastest pace in four decades. In a few panic-fueled hours, markets worldwide suffered a staggeringly steep decline.

The inflation rate is derived from the Consumer Price Index (CPI), which tracks the prices of an extensive set of consumer staples, including fuel, food, and housing.

The economies of scale enabling the creation of a deeply granular data set would allow the tracking of consumer prices virtually in real-time.  Market participants would have effectively been able to watch the market crash but in slow motion. Not that the inflation number would have had less impact on asset valuations, but markets would have been able to price these in at a measured rather than frantic pace.

Growth in revenues means growth in the amount of economic incentive flowing back to developers, who create more value and attract more end-users, leading to more revenues… a flywheel that spins ever faster.

An example of a vibrant developer-creator economy can be found today in the gaming industry. The gaming company, Roblox has built a powerful game development platform that draws a pool of highly-talented developers from around the world. Together, they create games played by millions of users.

These developers, many of whom come from traditional gaming companies, are enticed by both the creative freedom and the economic incentive: last year developers on the Roblox platform earned an impressive $500M.

Myths, Both Amateur and Professional

The first amateur myth is that working in isolation, a lone developer can create magic, unceasingly profitable investment model. Quantopian is one of the many companies founded on this myth, and it burned through tens of millions in venture capital before imploding.

Other companies embracing this myth have come and gone. Those that survive do so through customer churn, enticing amateurs with the prospect of finding the magic model.  Inevitably, these amateurs create overfit models that fail once deployed in real-time.

The other amateur-centric myth, related to the first, is that technical analysis (TA) tools can be used to create accurate asset forecasts. With eye-rolling names such as the Golden Cross, Gravestone Doji, and Three Black Birds, these TA indicators are touted by companies that likewise survive through churn.

TA is nothing but sortilege, and it is to data-based forecasting as astrology is to astronomy.  Its shaky premise is that price patterns reliably repeat themselves.  But, as TS Eliot wrote in his seminal quant treatise, Four Quartets: “There is at best, only a limited value in the knowledge derived from experience; the knowledge imposes a pattern, and falsifies… for the pattern is new in every moment.”

Once more, RenTech’s Jim Simons,  “With enough data, I know we can make predictions.”  It is not “with enough TA tools” or “with a single brilliant developer.”  Without data, all else is irrelevant.

We at Equeum have created a platform that proves the viability of a creator economy for asset price forecasting. With the efforts of fewer than 100 independent developers and the availability of access to a relatively small amount of data, this small-scale creator economy is forecasting cryptocurrency prices with startling accuracy.

The Equeum platform enables the sort of collaboration and resource sharing a creator economy needs. Platform features include:

A creator economy, drawing upon the talents of a worldwide pool of incentivized developers working with an ever-increasing amount of data, will fuel increasingly accurate forecasts.

The Goal of Complete Obsolescence

We will consider the platform an unqualified success when each and every platform component has been rendered obsolete. A paradox?  Maybe, but our guiding principle is an undeniable truth that we not only recognize but embrace.

Equeum’s role? We will be continually providing tremendous value to developers, a pivotal role in accelerating the growth and success of the platform… and we will be earning compensation commensurate with the value we create.

“Do I Need an Umbrella?”

Few would argue that weather patterns, or price trends, are random. And, given the stunning success of RenTech, it would be hard to disagree with Jim Simons when he says that, with enough data, it is possible to accurately predict asset prices.

Equeum is, with enough data, right now accurately predicting asset prices. You still won’t know where to go in Hyde Park to avoid the rain, but you will know whether to bring along an umbrella.